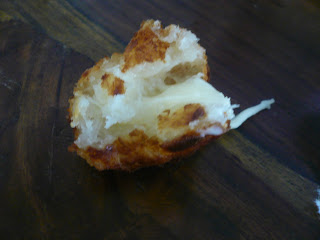 For a small New Year's gathering we're having, I've been blanking out on what to make because a friend is bringing fondue and all I can think is--bread and cheese are taken.  Every snack or appetizer other than crudite seemed to be bread-and-cheese centric, or inappropriate for the holiday.

For the mushrooms, I pry out and save the stems and puree with breadcrumbs, juice of one lemon, and italian herbs--a little basil, oregano, and garlic salt.  If I'm feeding non-vegetarians, crab/shrimp/any seafood is a great addition to the stuffing.  Spoon the stuffing into them, bake at 350 until well browned.  Sprinkle with parmesan when serving. Very easy.

The yuccas rellenos were a party fave, after the fondue of course, and they were fun to make.  I skinned, split, and boiled 2 very big yuccas until soft (about 20 minutes).  Once cooled I dug out the chewy thread in the center and then mashed with a potato masher. 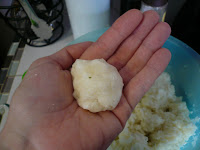 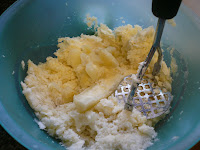 I seasoned with salt and lime, then cupped handfuls, about 1/8th of a cup each, in my palm.  I pressed asadero cheese cubes in, closed the yucca around them, and refrigerated them. 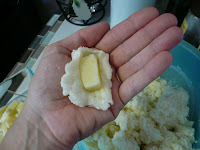 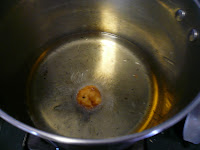 That way the cheese didn't dry out when they were later fried! 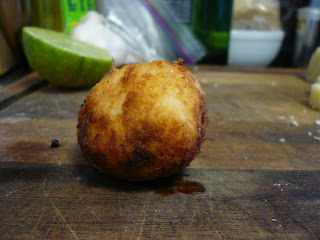 It still begged for a cool dip, like a sour cream or yogurt or buttermilk-based green goddess or lime-avocado sauce.  Lime and yucca just go together well.  The leftover of these, because I made too many, became a part of an egg souffle the next morning that was fantastic, but not photographed.  And then my leftover boiled yucca became a mashed yucca-cheese casserole, also not shot but worth adding the recipe for:

Stir and spread in a baking dish, bake at 375 until browned on top.  Cool a little and serve.
Email Post