I'm never able to use up an entire half gallon of milk OR yogurt before the whole thing turns, but I've learned a few tricks that make me more likely to use them.

For the milk, I turn it into yogurt (part of this post).  When the yogurt's about ready to turn, I'll be turning into the greek style which is thicker and can substitute for sour cream and heavy cream in almost any recipe. What I'm trying tonite is turning the greek yogurt into frozen yogurt.

So to recap:
Almost bad milk--->yogurt--->Greek style yogurt--->frozen yogurt
I don't have an ice cream maker, plus I'll only be making a small amount, but according to my research, a hand blender works and it is still just as creamy as the pro stuff.
To make yogurt, you first boil your milk, bringing it to boil for just a minute before pouring it into a bowl to cool to lukewarm (plastic wrap to maintain the sterility).  After it's cooled to that warm temperature, it can begin to breed acidophilus bacteria that convert the lactose into lactic acid, which in turn performs a magic trick (hard to believe I'm a microbiologist) and ta-da, yogurt.  One catch, though, is that unless you grow acidophilus in your spit, you'll need a starter culture--a couple spoons of any live culture yogurt will do. 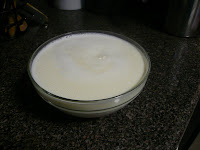 The rest is just waiting, and I like to use a heating pad on low beneath the bowl so that the process only takes about 12 hours.  So on the left--boiled milk; on the right, the same bowl after a night of sitting out (covered) with a spoonful of fresh yogurt added.  I'll be waiting a few more hours before straining this through cheese cloth to make... 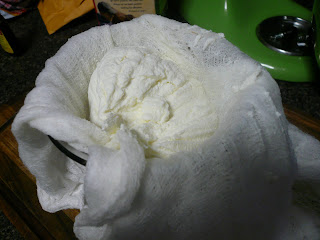 Greek Style Yogurt!
(this was made from the leftover plain yogurt in the fridge which also was the starter for the above yogurt)
Meanwhile, more immediate gratification from my recipe-within-a-recipe, like this whole post is a molten lava brownie thingy that goos out when you cut it.  Which is a great idea for a future post.

Frozen Yogurt Recipe
Greek-style yogurt (essentially plain flavor yogurt drain to reduce water content)
Flavor concentrate (mine is vanilla and coconut)
Add-ins (mine is chips of dark chocolate)
A sweetener--a couple Splenda packets made mine great, but a purist might just go for sugar

Mix your stuff, unless your add-in could get ruined by a hand blender, then put in a bowl in the freezer.  Every hour, stir with the blender until it's completely frozen. Mine took about 3 hours. 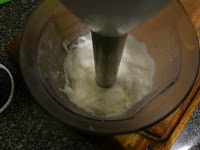 First check: not frozen at all. 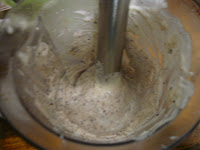 Another hour later--fairly crunch with ice crystals, so I added my dark chocolate chips,
then put it back for another 30 min... 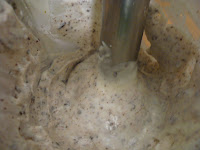 Coconut chocolate chip fro-yo.  Ideally I think another couple hours frozen would have been good, and this was a small batch so it went fast.  But still, pretty easy plan for a dinner party dessert.  Also healthy, low fat, high in calcium, low sugar, looks like I actually tried hard when I really only stirred crap up a few times...