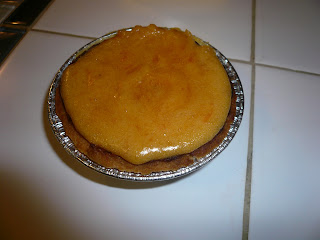 I used to hate the bitterness of grapefruit, but now I love it.

I think it's some sort of metaphor for life: with age comes bitterness, and an appreciation for that in others.  Maybe grapefruit got kicked around at the fruitstand in middle school.  Maybe the orange and the lime bullied it for wearing pink all the time.  So now it's older, it's bitter, it fights the urge to look up lime and orange on Facebook and see what kind of losers they grew up to be.  Then lime friends it and is all, "I totally want to know everything about your life!  Is your rind still as pink as it used to be?" and grapefruit falls for it and gushes about its life in cocktails and then lime posts pictures of itself in a margarita and a pie and a marinade and a famous Sonic drink, and grapefruit's insecurities blow up in his face all over again.

So I think grapefruit deserves more starring rolls in recipes I like.  Today, it's going to push Key Lime off the stage and be a pie.  "Grapefruit pie" just doesn't have a ring to it, however, so it's a tart.  Ruby Red Tart.  Ruby June's Ruby Red Tart.

I started with a baby test version: juice of 1 grapefruit, a pinch of zest, 1 egg yolk, corn starch, and a little sugar.   It turned out quite pink, the boiled-down citrus was super tangy.  Like the sweet bitterness of middle school, it stung at first but I couldn't quit eating it.

For my bigger version, there will be true justice for the grapefruit.  Let there be graham cracker crust and meringue!
Email Post
Labels: grapefruit tart Ruby Red Tart