I want to state, for the record, that I am opposed to trying weird new interpretations of classic Thanksgiving recipes.

It doesn't matter what you want to try, the classic works the best. Why fry a turkey when the baking makes the skin crispy? Why change green bean casserole when that's all you ever dream about for that day anyway? Why skip naming the bird if the guilt will still appear next time you see a live turkey?

Perhaps the last one isn't a universal truth, but we always named our bird. We also also always had a duck at Thanksgiving, which maybe isn't your tradition but it was ours and I don't care if you judge me.

However, after my rant, this pic is what I'm going to try this year, and I'll post how it turns out: 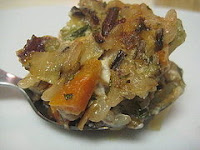 Wild Rice, Walnut, and Goat Cheese Stuffing
It's basically your typical stuffing plus some wild rice & goat cheese. But I'm using red rice. And roasted walnuts. Also I may throw in a little bit of dried fruit like cranberries, maybe even some sweet potatoes, primarily because this is Bobby Flay's recipe and he's a douchebag. I can do better.

seriously, though: from the Urban Dictionary
The OED defines 'Bobby Flay' as 'The unfortunate consequence of the union between television, ego, and blinding mediocrity.'
Email Post