Boules: A Game and a Food 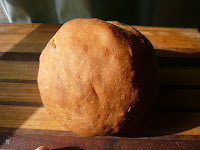 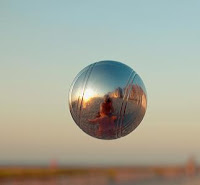 about a yard in pursuit of a smaller white ball, played with one hand following the rule that an alcoholic beverage must be in the other hand.

White Bread Plus (from Joy of Cooking, quote "plus for flavor, keeping quality and nutrition." Guess they didn't have Dr. Atkins when this book was wrote)
in 1 1/4 cups lukewarm water, dissolve 2 1/4 tsp yeast from jar (same amount as a packet) and 1 tsp sugar.

Beat in:
1 beaten egg
1/4 cup melted lard or shortening (lard not being a staple on my shelf, i melted Crisco butter-flavor shortening and it worked great)
3/4 tsp salt
1/4 cup sugar

Using my mixer, I let this knead till smooth and elastic, then let rise in an oiled bowl for an hour on top of the dryer while washing clothes (warm dark place) *with a damp towel over bowl.*
After that first rise, separate into three balls of dough, wrapping the dough to a base (so the top is smooth) and putting that (folded edge base down) on the pan you'll bake them on. I used a pizza stone sprinkled with cornmeal. Turn the oven to 400 degrees. Put the bread into the cold oven and, after 15 minutes, reduce heat to 375 for 25 more minutes. It will make its second rise in the oven.

Two tricks I used to get a crisp outer crust: I brushed the outside of the dough with water, and I put a bowl of water at the bottom of the oven.

Another trick I learned ONLY from Joy of Cooking despite much research: you must let your bread cool completely before putting into any storage container. That moisture that escapes would, otherwise, allow mold to grow. Considering no other fancy cookbooks taught that, I'd like to acknowledge that I do plan to succeed off the backs of the overworked housewives (ere the age of bread machines) that came before me.
Email Post