Cheating Isn't Cheating If You Eat the Evidence (Part I)

Life's been a bit busy lately and I haven't had the drive to be much a gourmet after 9-hour days at the office. That doesn't mean I haven't been creative, though, and I thought I'd share some of my favorite short-cut dishes that taste complicated.

Pics here, following the theme, are a mystery--did I take the photo or did I cheat and steal it somewhere?

Mix together all ingredients (except the pie shells) while you pre-bake one of the shells for 8 minutes at 350 degrees. This makes the crust crustier and it won't be as soggy for the final devouring.

Next, pour all ingredients in to the pre-baked crust and bake for 30 minutes while the other pie shell defrosts enough to pop it out of its aluminum pan. Ideally this amount should pile up to be a little taller than the crust, but thick enough to not pour out.

At the 30-minute mark, pull the pie out and put the next crust on top, using a knife to put steam-escape-valve slits in the crust.

Bake for another 20 minutes or until the top crust turns pretty and golden. Serve and tell everyone you hand-made the crust and gravy, grew the veggies yourself, and hell you even raised the chicken. Well done you. 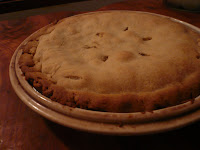