Oyster Gluttony All Night (And Still Not Complete) 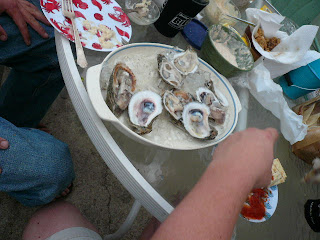 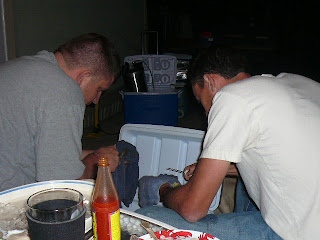 So it turns out that 100 oysters for 4 people is, actually, too many. We managed to knock out about 65 oysters, but the remainders are on ice for an Oysters Rockefeller Monday Night. And cracking those suckers open is harder than it looks!

As for the calamari, it turned out great and was devoured before I caught it on camera (actually it's got a tiny cameo in upper right corner of the first photo). In addition to the recipe I used, I soaked the sliced tubes of squid in the buttermilk for 2-3 hours prior to final fry. I learned that if you don't have the oil as hot as it needs to be, all the breading falls off into the oil and floats on the surface before burning and settling to the bottom to create a blackened mud that will land on the next batch you fry. So my first batch was best and the next 3 weren't tops; however now I have the system down.

I also learned your breading should be HIGHLY seasoned or else you should throw sea salt onto the fried calamari. My dipping sauce was 1/2 cup yogurt, 1/2 cup mayo, 2 tbsp stone ground mustard, and 1 tsp dried ground mustard. It was pretty good.

To go along with the spread we had crab dip, all the oyster fixins, and homebrewed beer. Fintastic.
Email Post
Labels: calamari homebrew oysters