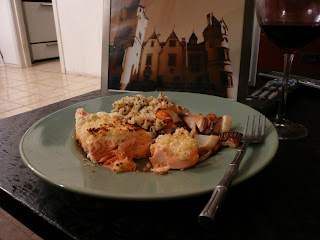 (photo explanation:out-of-focus dinner and a photo of Zinkovy Castle in Czech Republic, which Taste Tester helped renovate)
Last night we had a very special guest who said this was pretty good, so I thought I should post. It was meant to be horseradish crusted salmon, but I forgot to look for powdered horseradish so I went for the wasabi. The sides were black and brown rice pilaf and roasted root veggies.

It was preceded by my favorite, steamed mussels, but no photos taken. The fishy was wild Coho(?) Alaskan salmon, which is radically better than farm raised salmon because the color is real. Atleast as far as I can tell, that's the only difference. I'm not as discerning a salmon eater as I wish, but I listen to those guys at Central Market and just repeat whatever they say.

For the veggies, which took the longest, I chopped a rutabaga, 3 turnips, and some carrots and drizzled with olive oil, salt, and pepper, then roasted at 400 for about an hour while I was cooking all the rest. And drinking lots of red wine. Specifically a primitivo and a Texas brand called Red Truck.*

The topping for the fish was 1 to 1.5 cups panko, salt and pepper, wasabi, olive oil, half a lemon, a pinch of flour, and then enough water to make it a little spongy. We grilled it but next time we'll bake it because the grill didn't brown the topping well enough.

The pilaf was wild/black rice (1/4 cup) sauteed in the pan with shallots, garlic, 1 bay leaf and 1 cup white wine, then I added 1.5 cups brown Texmati and let that get hot. I added 2 cups water, plus the rest of the lemon and some salt, a simmered it for ~30 min.
That tasted like bland crap, but then a teaspon of thyme and some more lemon made it more flavorful.