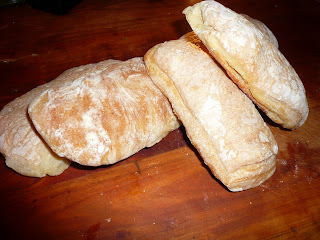 Well not really but it feels like it. I made bread. I've really never succeeded at bread-making, it's always resulted in a lump of crumbly disgusting unleavened blah, which I forced myself to toast, spread with butter, and think pleasant thoughts as I tried (often in vain) to swallow.

However last night this excellent ciabatta resulted from what I was sure was another in a long history of total abortions. The reason I thought so was that my new cookbook, a fantastic tome called The Professional Chef, has only measurements in lbs, oz, and kg, and I didn't have a scale. I did some frighteningly bad math which resulted in pancake batter in my kitchenaid rather than anything resembling bread dough. So I added flour...and added flour...until the flour bag was almost empty...then I let it rise...and it didn't.

At that point I gave up but left the oiled mound of failure on the stove, and 3 or 4 hours later before bed I discovered it had, in fact, doubled in volume. I popped it in the oven and 30 minutes later: ciabatta. I woke up my taste-tester and forced him to try it immediately. His flattering comment was, "Seriously? I'm sleeping." As my recipe was a complete luck-out, I'll provide the original one:

Combine water and yeast in mixer until dissolved. Add flour and salt on low until just combined, then knead on medium speed for 10-12 minutes until dough clears the bowl and clings to hook. Now that I have a mixer, I'm too good to tell you how to do this without one. Figure it out for yerself.
In a lightly oiled bowl, coat the dough with oil and cover to let rise for 75 minutes (or in my case, until you go to bed), until doubled in volume. Turn onto a floured surface and stretch into a rectangular shape without punching out the gases. Chop into loaves and bake at 450 for 30 minutes, until golden brown. Brushing the loaves with water will make their tops more crisp.
Email Post