Once in college, I applied for a student job and was placed at the Texas A&M Dairy farm, where I expected to be interviewed and shown around.  I wore shorts and flip flops, and they asked me to go to work that night.

I ended up in overalls and flip flops, stomping through manure, slapping cow's asses to steer them to the dairy.  There they lined up in an aisle, had each teat washed with an iodine dip, and I learned to attach the milking machine.  By about 930pm, I thought I had the flow down, then someone supervising me realized I had missed something (I don't recall what, but it was vitally important) and they had to drain out about 20 gallons of milk and waste it.

I have struggled and overcome my fear of milking...in fact I want a milking goat but Taste Tester wisely refuses.  One day, though, I'll get my goat.  (Why is "you really got her goat" a phrase with a negative connotation?)  Goat milk is easier for humans to digest, does not cause allergic reactions, and is naturally homogenized--you don't have to separate the milk after milking.  And I love all goat cheeses.

This was my first making-of run, next I'll try to make something cultured, but this turned out nicely tangy and great for a spread. 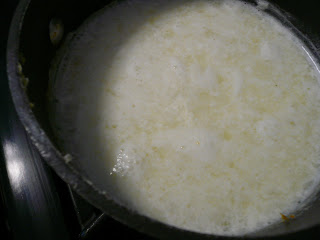 I boiled a half gallon of goat's milk to 180 degrees then let it rest.  I couldn't find fresh goat's milk, only pasteurized, but that would be fun to try.  I then added 1/4 of a cup of lime juice, but lemon or apple cider vinegar were also recommended.  I let that sit for ~20 min to curdle.  Above is what curdling looks like.  I expected more clumps but it was reminiscent of watching grits boil. Except more boring.

Next I ladled this into a colander lined with several layers of cheesecloth.  Next time I'll buy some loose-weave muslin, the cheese cloth eventually wasted a lot of cheese. 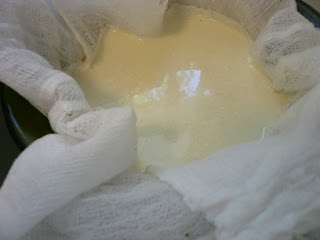 If yogurt making was easy, this was remedial easy.  If I had kids (and I liked them) this would probably be a fun activity.  After this, all I had to do was wait.  Once it drained low enough to tie up the bundle of cheesecloth, I let it drip over the sink for half an hour, then let it drip over a bowl in the fridge for another half hoour.  Then I turned it into a bowl and added chopped rosemary, 1 crushed clove garlic, and a dash of salt. 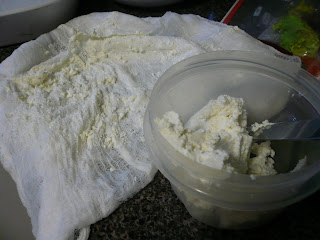 I'd made some fresh French bread also, and we toasted that and schmeared the cheese. Good times.

I'm going to start adding what I thought were my overall costs to make things, and to be honest this was ~$4.00.  In reality, buying your own goat cheese would be about the same.  But if you could buy a couple gallons of goat milk for a better rate than I got, it might be a savings.  Time to consider dairy maiding again.
Email Post