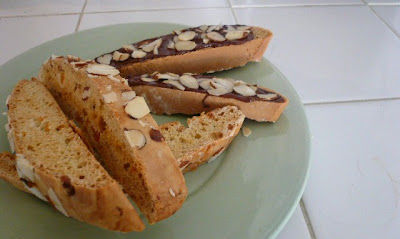 Get a look at how productive I am! Cookies yesterday (partial fail acknowledged), half my Christmas shopping done yesterday...and now the rest is getting done today! I'm going to make my work friends biscotti since we all enjoy our coffee. I've started with a recipe from The Professional Chef, which is a textbook/cookbook that Aunt Sadi gave me in 2007. It's like an encyclopedia for Cooking Like You Know What You're Doing. 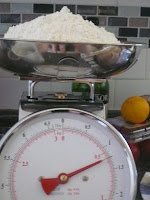 Biscotti's also fun because it allows me to use my scale, which I LOF. This recipe, strangely, didn't call for any butter. I've probably got 24 or 36 individual biscotts from this one, but I plan to try another next round. They are flavored with almond extract and orange oil, but then I split the dough and went with fruit added for one, while I topped the other with chocolate and almond slivers.

Whisk the flour and soda together in a separate bowl while the mixer whisks the eggs, sugar, salt, and extract to be lighter in color and thick. 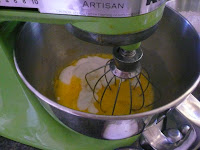 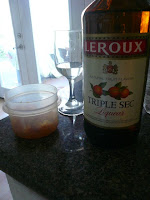 While that whisked, I chopped dried apricots and added a jigger of triple sec to them to soak. I also may have had a jigger. To be sure it was still good. You could do one or both of these things.

Next, incorporate the flour slowly. Due to the lack of any butter or fat, it's a super-sticky dough, but I rubbed some vegetable oil on my palms before I formed the dough on the pan.

Once the flour is incorporated, you can add any nuts or fruit you chose. Half of my dough got the drunken apricots. Half stayed sober. 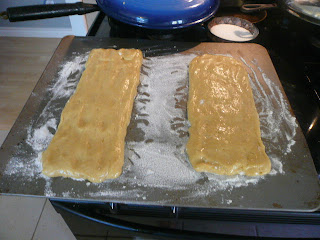 I was out of parchment to bake them on, so one pan had a silicone liner and for the other I went old-school: Pam and flour. (As mentioned before, I greased up my hands for doing this so all the dough was on the pan instead of my hands.) Bake for an hour at 300 degrees, then allow the loaves to cool for 10-15 minutes. 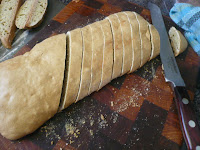 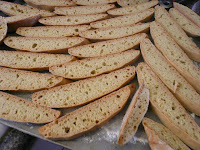 Now slice with serrated knife from the corner inwards, as thick as an inch or thin as a half-inch. Lay them back on the baking sheet and bake again at 275 this time for 30 min.

Once cooled, I spread melted semi-sweet chocolate pieces on the side of the plain biscotti, then sprinkled with slivered almonds.
Email Post
Labels: biscotti drunken almonds