Nevermind. Failure Popsicles Instead of Pizza. 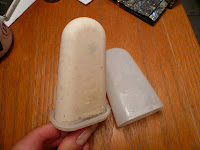 Once again, my job interfered with my real obsession (cooking...and some beer), though it's hard to tell sometimes by which I'm more obsessed. Lots of future recipients got helped tonight, and we'll make the pizza later.

However since I will probably be up till 7am, I thought I'd post a semi-failed attempt at frozen yogurt. I used this recipe from steamykitchen.com, but strictly followed Grandma Ruby's rule of never strictly following the recipe.

I used honey instead of sugar; I used a lot of toasted coconut in the mix (hers was just sprinked on top), and I think I bought Greek-style yogurt but hellidunno--if it's from a Greek market surely I get points for effort. It just wouldn't freeze in my ancient icecream maker. Might be the machine; more likely culprit: operator error.

But after failure, I rummaged up mom's slightly less ancient popsicle molds and poured it in. They froze great and make for a nice, semi-healthy snack. Plus it's freakin' 100 degrees outside, so they are refreshing. I think I'll call them Symbols of Failure Popsicles.
Email Post
Labels: coconut frozen yogurt