Chicken Pot Pie, Made From Scratch 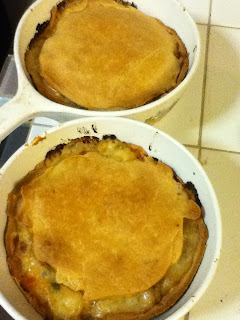 Taste Tester has the flu, so chicken soup was on my radar but sounded so Blah.  Almost as blah as a milk frother, but not as blah as Dan Patrick. This is not blah.  In fact, this has a VERY exciting ending, which you shouldn't cheat and skip down to, but rather let the suspense build.

So I scratched this together, using leftovers and a pie crust recipe from my new discovery, "The Frugal Gourmet Cooks American" by Jeff Smith.  I bought it whenever ago from 1/2 Price Books and then never read it, but it's all these historical recipes dating back to the Native Americans.  Did you know George Washington distilled his own rye whiskey and that Hasty Pudding is actually just cornmeal boiled in water?  But that's for another time.

So my pie pastry was this, blended in the food processor until it formed a ball and cleared the sides:
1.5 cups flour
1/2 cup butter (chill)
1 tsp salt
1 small egg
2-3 tbsp ice cold water
* I blended everything before adding the water so that I could watch it form up and not overdo the water.

While this chilled in the fridge, I made the filling (basically white gravy or bechamel with stuff added):
2 tbsp butter
2 tbsp flour
1 3/4 cup milk
1/4 cup half and half
1tsp salt and pepper or more to taste
1 tsp chicken boullion
dash of thyme for flavor
1 small chopped potato-- about 1/2 cup
handful frozen peas and carrots (maybe 1 cup altogether)
1 cup chopped chicken (leftover from a roasted chicken from the HEEB) 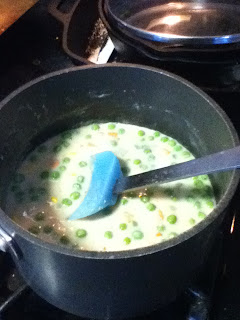 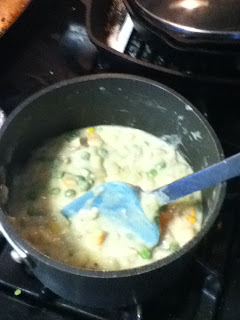 First melt the butter in a small pot and then whisk in the butter at medium heat.  Keep whisking until this roux becomes tan, then add a little of the milk, blend well with the whisk, and then blend in all the milk, cream and salt.  Add the potato and stir as this thickens.  Add the frozen veggies and chicken and cover, stirring every few minutes to keep it from clumping or burning to the bottom.  Preheat oven to 400 degrees.

As the potatoes are softening, get your dough back out and split the ball into two parts.  I use 2 sheets of wax paper to roll it out but a floured surface will work too.  I had picked out 2 Corningware bowls and once the dough was rolled to 1/8 in thickness, I laid it in and fit to the bowl.  This involved snipping off the extra and the inside folds, reserving the dough for the topping. Poke holes in the bottom with a fork or knife. 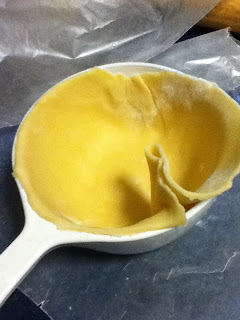 By now my filling was nice and thick and I turned its heat off, and worried about the crust bottoms.  I prebaked them because I like them to be crispy.  It was probably 10 minutes at 400 degrees.  They got nicely puffed, and then I let them cool a few minutes before adding the filling. 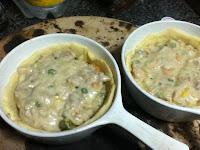 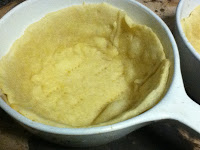 Next I rolled out the tops, I had just enough dough left over for both.  Cut to fit, press onto the tops of the filled crusts, and back in the oven for about 30-45 minutes until beautiful brown on top.

And to reveal my big secret, it turns out this is the cure to flu.  I'm sharing it with the world because I'm that generous.  I could have made millions, but I'm just too nice.  You're WELCOME.