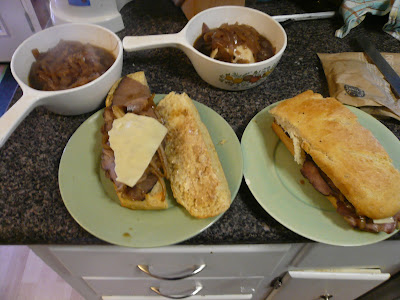 We both ended up sick over the holidays, so soup sounded good to me, but soup is never enough for filling the Taste Tester's gullet, so I made him one of my favorite heavy sandwiches to go with, from the first restaurant I worked at.  Beef sandwiches + french onion soup = awesome excuse to dip your sandwich like an Arby's Au Jus.

In a deep, heavy bottomed pot, saute sliced red onions in olive oil, throwing garlic in once they are very soft, then adding sherry before garlic burns.  Let sherry burn off the alcohol for ~5 min, then add the beef boullion and let simmer until the onions are soft enough to bend like noodles but not disintegrating.  Salt to taste.  When served, put a thick slice of baguette in bowl and top with slice of cheese, then spoon soup over it so it melts.  Gooey soggy cheesy bread wonder.

Beef and Baguette Sandwiches
2 small french bread rolls
mayo and A-1 or another steak sauce
sliced roast beef
provolone or swiss cheese
onions (unless you're already worn out on them, see above)
worcestershire sauce

Saute onions in a little oil, add a couple dashes of worcestershire sauce, and warm beef in that pan while bread toasts.  Melt cheese atop the beef and onions.
Spread toasted bread generously with mayo, then 1-2 tsp of steak sauce on top of the mayo.  I was not generous enough with ours and regretted it!  Plate open faced with beef.  Serve with multiple napkins, this is awesome but messy.
Email Post