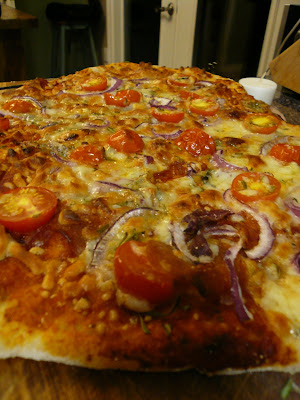 Holy crap this was good pizza.  After so many fails, we finally had a winner with the same damn pizza dough I'd been cursing all along.  It's from the Silver Palate New Basics Cookbook, and it turns out it just needed a longer bulk fermentation and another fold.  So many of my cookbooks are filled with corrections in the margins that I really think there's a market out there for a cookbook editor who checks more than just grammar.

I've learned from diligent studies of breadmaking (or reading one really good book about it, anyway), that our mother's lesson of "punching down" dough during successive rises is a great outlet for domestic fury, but not the best method to maintain a well balanced dough.  Instead, during the rise (or bulk fermentation), I fold the bread to release gas.  It's basically like trying to fold bedsheets that have the elastic--not really exact or pretty, but there's some semblance of organization there.  I pull from the top and fold in, from the side and fold in...and so on for four sides folded into one seam that is then turned under in the bowl for the next rise.  This is s'posed to improve the organization of the gluten matrix.

Like anybody's doing electron microscope studies of gluten in dough.  Really, where do they get this stuff?

In any case, this recipe calls for 2 one-hour rises, but I added a third and the dough resulted being much more elastic and with less tendency to tear when stretched into a shape.

The water should be around 75 degress, and the mixer can do the rest.  Proofing the yeast isn't necessary, but I always dissolve it in the water first to help the spores break open. Let the mixer run at a low-medium setting to knead the dough for about 3-4 minutes or until it is smooth and only clinging to the bottom of the bowl but clearing the sides.

Place in an oiled bowl in a warm spot and cover, allow to rise until doubled (~1hr) and then fold, repeat for another rise and fold, then rise again one hour and work into your pizza shape.  This recipe made two ~14'" pizzas.

Our toppings for Taste Tester's were pesto, spinach, mushrooms, and goat cheese plus mozzarella.  Our toppings for mine were a lite schmear of tomato paste, rosemary, red onion, bleu cheese, fresh garden cherry tomatoes, and some shredded mozz and pepperoni. 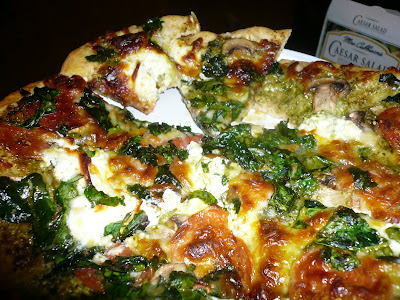 The oven should be already at 500 degrees, and your pizza stone should be that hot too.  (Careful kids!)  I still want to master Chef Scotty's version, but I might just settle for letting him make that for me.
Email Post
Labels: pizza pizza dough