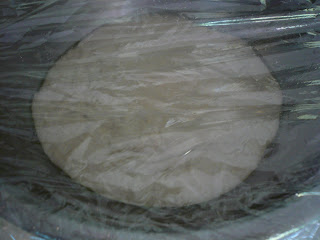 I ended up adding more flour in order to reach the desired consistency of dough that was not clearing the bottom of the mixing bowl but clearing the sides.  This was probably another cup of flour, which in a high humidity place like my kitchen, was not unreasonable.  But it was definitely sticky.

Turn into an oiled bowl, let rise for 1.5 hrs...I followed that instruction, then when I removed the plastic wrap, it was so bubbly and sticky that it seemed to have risen too long.  Extra flour was needed in order for it to be manageable enough for the final fold into 2 pizza dough piles that would rise another 1.5 hrs and then be shaped, topped, and popped into the oven.

So we lead into the next chapter... 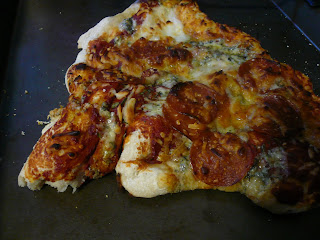 T
This is a photo of the terrible mess that came out of the oven for the first round of dough.  I let the last rise go too long, probably 2 hrs instead of 1.5.  This is blamed on Taste Tester, and his distraction of me with cool bottled beverages. But I think Scott would say the humidity didn't help.  I shaped the dough and it kept tearing, I then tried more flour and a roller, then toppings...into a 500 degree oven, cornmeal on the bottom to get it onto the preheated pizza stone, and...mostly awful.  The dough definitely has great oven spring, and the toppings surprisingly tasted good together (gorgonzola, rosemary, and pepperoni over a light red sauce).

The 2nd pizza there is no photo for, as it was utterly atrocious and had to be thrown out due to its dough being, well...still dough.

We're still cleaning up the mess I made in the kitchen, but I'm determined to keep trying.
Email Post