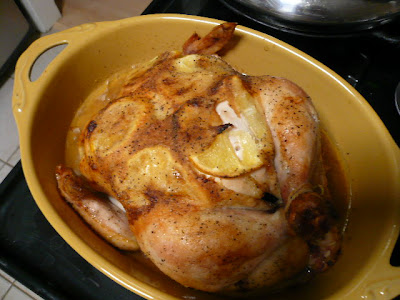 Taste Tester enjoyed a weekend of bachelor partying *not for his own wedding* and to welcome him back I roasted a whole chicken and used our leftover cheddar for homemade macaroni, con chipotle. Possible other men don't enjoy such receptions after a bachelor party, but I don't mind telling you the weekend's activities were dominated by a scrabble tournament.

For the mac (inspired by The Barefoot Kitchen Witch), while I boiled 4 or 5 cups of pasta shells, I made a simple roux from 4 tbsp butter and 4 tbsp flour melted and whisked. Then I poured in 3.5 cups warmed milk, briskly whisking under low heat until it thickened. Where I'm from, this is gravy. Where it matters, it's "bechamel". Whatever.

After that was nice and smooth, I added 1 cup each of grated white and yellow cheddar blocks, basically a big handful each, stirring to melt. I had some roasted garlic on had and added 4 cloves of that also, then the chipotle in adobo. Depending on your spice tolerance, you could add 1-3 peppers chopped. Avoiding the seeds reduces the heat, and also makes you a sissy. Salt to taste.

During the sauce prep, the shells finished, and all went into a baking dish and stirred. I sprinkled a little old parmesan and panko on top for crisp, then baked at 375 for 30 min with foil over it, 15 more without until it browned the panko lightly. 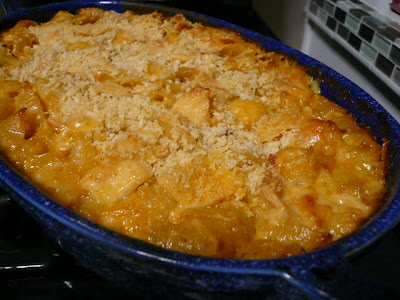 It was delicious, I probably shouldn't have baked it that long but even the browned edges were good. I might even use more cheese in the future.

The chicken, stuffed under its skin with slices of lemon, was simple but delicious. It was also baked first for 30 min at 375, then I bumped up the temp to 400 to finish it. When internal temp along the drumstick muscle (but not too close to the bone, which heats faster than the meat) got to 170, it was perfectly juicy and delicious.
Email Post
Labels: chipotle macaroni roast chicken