So I've been wanting to try sourdough for a while, because I love the flavor and especially the texture, but all the recipes involved beginning a "starter" which is a yeast-baby fed with water and sugar or flour. It's called a starter because it is kept alive in your kitchen through careful nurture, then lends a few tablespoons when needed to start, or rise, your next loaf of bread. Legend has it that many long-lasting kitchens have had long-lasting starters with the same bread of yeast from over 100 years back.

Meanwhile, we have 4 dogs and I don't need another mouth to feed. I also object to the logic of a thing being called a starter if it, by definition, does not end.

However, over at jemangelaville, she had the hutzpah to make a starter and finish it! Her recipe sends the whole starter off to fight the good fight in the oven and never return. I am impressed by this brave choice and decided to try it. 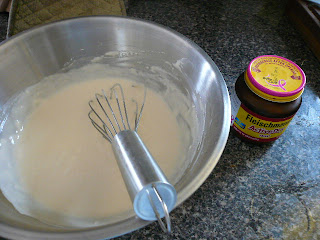 And now...get ready, start...and wait! This gets covered in plastic wrap and left on the counter for 2-12 hours. I'll be waiting atleast 12.

By the next morning (oops, few beers and fun made me forget the timing), here's how it looked: 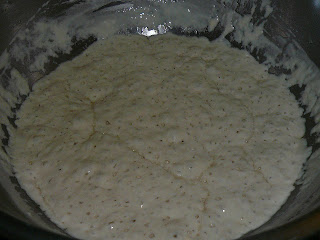 And it smelled delicious, like a yeasty beer smell. Mmm. This got mixed directly into the AKAM along with 4 cups of flour, 1/2 teaspoon more yeast, 1 tablespoon sugar, another cup of water (but I used milk, just to be a rebel), and 1.5 tsp salt. Then the first rise, about an hour, and a second rise in the pans. I tried out a baguette pan Mom gave me, and a loaf pan. Slight mistake made by trying to artifically encourage the rise (sat them on top of the oven) which caused some early yeast deaths. Although, considering the life of a yeast cell, I doubt this was much mourned. 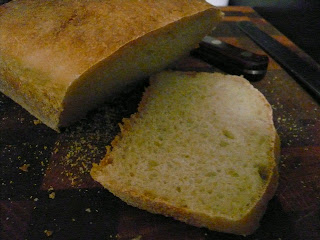 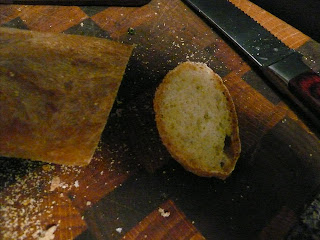 And it was absolutely delicious for sandwich, breakfast toast, and spreads. I definitely screwed around with the recipe, but I think what resulted was closest to Schlotsky bread. More dense and chewy than the beautiful white French bread over at jemangelaville.
Email Post
Labels: french bread sourdough bread starter