The Secret Life of Mayonnaise 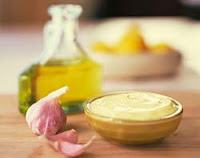 I’ve been noticing lately how often mayonnaise, the dressing of the American masses, has so often cameo’d in fine dining without our knowledge. This simple emulsion of oil, eggs and vinegar (and sometimes lemon juice) was invented, according to one source , by a Duke’s chef “in 1756 by the French chef of the Duc de Richelieu. After the Duc beat the British at Port Mahon, his chef created a victory feast that was to include a sauce made of cream and eggs. Realizing that there was no cream in the kitchen, the chef substituted olive oil for the cream and a new culinary creation was born. The chef named the new sauce "Mahonnaise" in honor of the Duc's victory.”

I don’t know if I believe that, but I think we can all agree it’s been around for a while and it ain’t goin’ anywhere. I personally use it in sandwiches, meat salads, potato salads, and as a base for homemade dressing like ranch.

However mayo leads a secret, exciting life in the kitchens of many fine establishments, moonlighting as a variety of FAINCIER toppings you might not recognize. For instance:

aioli-- pronounced “yolli”, this is essentially a garlic-flavored mayo, but has been broadened to include mayo with pesto, mayo with horseradish, mayo with tarragon…but it’s still just mayo! Remember that when the waiter tells you he’ll have to charge extra if you want another side of the aioli.

spicy sushi sauce--I don’t know where you eat sushi but my favorite places serve a orange-colored, tangy, spicy, and creamy sauce that has sesame oil flavor. I tried for two years to create it at home with heavy cream before I was at a low-rent sushi place that put on their menu “mayo sauce”. It sounded disgusting but turned out to be the secret ingredient. I now make it often with srirachi, mayo, a little rice wine vinegar, and sesame oil.

creamy horseradish—your favorite steakhouse may make this from scratch, but it ain’t nothin’ more than mayo + horseradish. Bam.

And finally last night I had a delicious grilled salmon with a “creamy wasabi sauce.” It was delicious, creamy, tangy and wasabi-y, but I could have bought it in the Hellman’s aisle.
Email Post