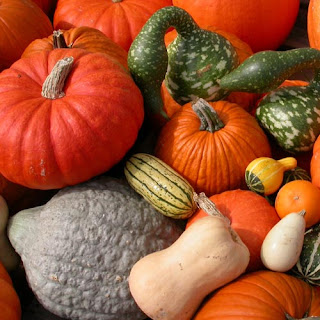 Well I think I just made up a successful recipe. The company potluck involved a contest so I invented a pumpkin lasagna, and have already had a couple requests for the recipe. It didn't taste strongly of pumpkin, which may be a bad mark or good depending on your taste. I didn't get to take a photo before it was demolished, but here's the recipe:

First: I prepared the fillings for the separate layers before anything else. *Anchos have to be soaked in a little boiling water to soften up. You can do it an hour before or days before and keep in fridge.
I sliced and cooked down the onions, throwing in some old red wine to give them flavor and getting them very brown (all alcohol burns off). I add salt and sugar to get them caramelized.
In another bowl I mixed the spinach (defrosted and drained), crushed garlic cloves, ricotta (~1cup) and 2 eggs, plus some salt.
Then in another bowl I mixed the 2 cans pumpkin, the softened anchos (chopped or pureed), a teaspoon of sage and cumin each, and enough salt till I could taste it (~2 tsp).

You could switch up or thicken up any layer you want!
I know it sounds crazy not to cook the noodles, but I used to work in a restaurant and we never did. As long as the ingredients have some water (pumpkin/veggies/tomato sauce) AND you seal the pan tightly with aluminum foil, the noodles will cook.I baked at 400 for 1hr, checked it, and cooked it for 15 more min, but your oven might be better than my old one. For most ovens I’d cook it slower at 375—like maybe 1.5 to 2 hrs.
Email Post